Broad Eichleay Recovery Against ODOT May Be Limited

A major Central Ohio highway contractor and Ohio's Department of Transportation ("ODOT") have actively litigated the applicability and legal parameters of the Eichleay formula - which is a generally accepted way to compute unreimbursed home office overhead in the event of compensable project delay or suspension. As a result, the applicability of the Eichleay formula to project delay in Ohio was confirmed and a public authority's exposure for these types of delay damages may have been broadened by a decision of the Court of Appeals. Complete General v. ODOT, Case No. 98AP-1619 (May 25, 2000, 10th District).

The Eichleay formula is generally calculated as follows: 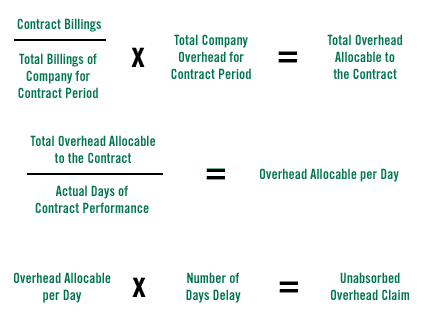 The Franklin County Court of Appeals ruled that a contractor may establish a prima facie case for unabsorbed home office overhead when an "extension period" was added to the contract duration due to a government-caused delay during the original contract period and the contractor was on "standby" during the suspension period. The Court stated that it was only necessary for a part of the contractor's work to be on "standby," and not the entire project, for Eichleay to apply. The Court also said that the contractor's normal replacement of work during the bidding process should not constitute replacement work to bar an Eichleay recovery. Finally, the Court minimized the impact of the normal winter ODOT shutdown on the Contractor's recovery by stating that the Eichleay computation should be based upon the length of the extension period, rather than the suspension period. This appellate decision reinforced that Eichleay is alive and well here in Ohio and that this component of damages shall remain a considerable risk for public owners in the event of project suspensions and delays.

While Eichleay based recoveries for unabsorbed home office overhead will continue to be viable, a contractor will still have to prove: (1) that it was on "standby" during an owner caused delay; and (2) it was unable to take on other work during the "standby" period. Further, owners like ODOT will maintain the ability to challenge certain cost components in an effort to reduce the contractor's recovery.