Will o-HI-o Voters “Legalize” Marijuana in November? The Employer’s Guide to Marijuana in the Workplace, Part One

It’s official. Ohio voters will decide in November whether to “legalize” recreational and medical marijuana by voting for or against state Issue 3. The big question is if passed, whether Ohio employers will be able to discipline, terminate or refuse to hire the cast of Half-Baked, Jeff Spicoli or Cheech and Chong. This is a three-part series that will answer all of your questions (or at least the most important ones).

In the first part of the series, we will look at the reason Ohio employers need to better understand marijuana since voters will be deciding on a proposed constitutional amendment (Issue 3) on the November 3, 2015, ballot. The second part of the series will examine other states’ “legalized” marijuana laws and what employers are facing in those states; we will also look at the interplay between federal and state law in the U.S. Finally, in part three, we will wrap up the series with insight from our team of legal experts around the world into how marijuana legalization has affected employers in other countries. Throughout this series, we will provide insight into what employers need to do now in order to prepare for “legal” medical or recreational marijuana in Ohio.

Most employers want to know how to keep drugs out of the workplace, but the legalization of marijuana in other states and its prospects in Ohio make that more difficult. Not only should employers educate upper management on marijuana’s impact in the workplace if legalized, but all employees should understand the consequences of such a decision.

What Does Issue 3 Do?

If Issue 3 passes, Ohioans twenty-one and older would be permitted to: (1) possess, use, transport and share one ounce or its equivalent; (2) grow and cultivate homegrown marijuana; and (3) grow, transport, buy, sell and process industrial hemp. Patients with a valid certification would be allowed to possess, use, transport, etc. Furthermore, employers with a drug-free workplace policy would be required to permit a patient with a medical marijuana certification to self-administer the medical marijuana subject to the same conditions applied to administration of prescribed medications while at work.

The proposal seems very broad, but there are some prohibitions. Marijuana consumption would be prohibited in any public place or on the grounds of a public or chartered nonpublic elementary or secondary school, state-licensed child day-care center, correctional facility, community corrections facility, or in a moving vehicle, aircraft, train or motorboat. As with existing drug enforcement laws, the burden of compliance falls upon local law enforcement for minor offenses.

Will Ohio employers have control over the workplace?

Employers want certainty when dealing with workforce issues. If you have a zero-tolerance illegal drug policy, you want to be able to enforce it. But even the best written workplace polices and employer handbooks need review periodically. Gray areas in the law feed litigation if local, state or federal regulations are not clear and the highest court in the land (the Supreme Court of Ohio) has not ruled one way or another on the issue.

The proponents of legalizing recreational and medical marijuana in Ohio have given some direction in the proposed constitutional amendment, but experience in other states has proven that such clarity is helpful, but not bulletproof.

The employer provision of Issue 3* reads:

*Read a copy of the proposed marijuana “legalization” ballot language in its entirety .

If approved, this language doesn’t protect employers as much as more assertive language found in other states that have legalized marijuana, such as Colorado. However, Ohio employers do have some good federal case law to help on the medical marijuana front. The 6th Circuit Court of Appeals has held that “private employees are not protected from disciplinary action as a result of their use of medical marijuana, nor are private employers required to accommodate the use of medical marijuana in the workplace.” The Court further stated that to do so would “create a new category of protected employees, which would mark a radical departure from the general rule of at-will employment.” Therefore, if Harold, Kumar and Neil Patrick Harris are your job applicants or employees, they need to think twice about lighting up in Ohio while on their way to White Castle. Even if Issue 3 passes, Ohio and federal law will still be at odds.

Later in Part II of this series, we will look at legal considerations in other states regarding the Americans with Disabilities Act (ADA), workers’ and unemployment compensation, collective bargaining agreements, Family and Medical Leave Act (FMLA), the Fourth Amendment and other issues arising when dealing with individuals using marijuana.

Like minimum wage, casinos and marriage, this proposal, if passed, would be forever enshrined in our state constitution – at least until another ballot issue passed by voters changes it. The proposal creates ten site-specific locations in Butler, Clermont, Delaware, Franklin, Hamilton, Licking, Lorain, Lucas, Stark and Summit counties, for Commission-licensed Marijuana Growth, Cultivation and Extraction (“MGCE”) facilities. This is otherwise known as the “monopolistic” section (more appropriately called the oligopolistic section) of the proposal because it would enshrine county auditor tax parcel IDs in Ohio’s constitution for those specific property owners. According to county auditor websites, some of the parcels are owned by individuals, others by corporate entities and another by a municipality. While some owners are known, several have not stepped forward, leading to speculation that much of the estimated $20 million supporting Issue 3 is coming from wealthy, out-of-state investors. 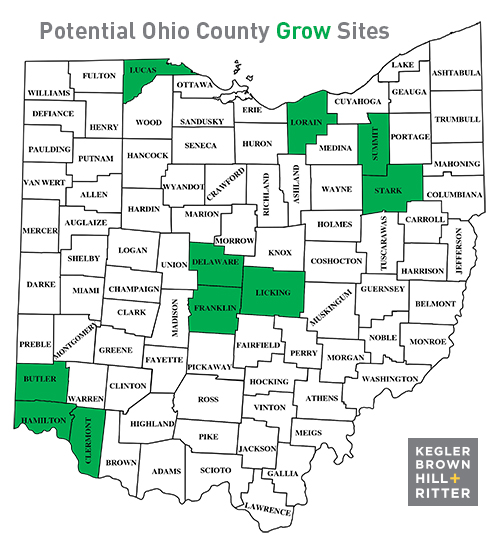 The limitation on grow sites means if you are one of the 70,000+ farmers in Ohio (according to the Ohio Farm Bureau Federation (OFBF)) marijuana is one crop you don’t get the opportunity to grow. This fact is certainly why the OFBF and other associations, health care groups, business advocates, every statewide elected official and legislators of both major parties are lining up in opposition to Issue 3. The opponents are also concerned with the number of dispensaries and retail stores across the state authorized by the Issue 3 language. Issue 3 permits 1,100 retail stores across the state. The proponents call this job creation. The opponents state this creates three times more marijuana stores than existing liquor stores that would dispense recreational marijuana in the form of joints, liquids, sprays and edibles such as cookies, brownies and candies that appeal to children.

Read more about the "Vote No on Issue 3" campaign.

Read more about the "Vote Yes on Issue 3" campaign.

Voters will have two amendments to choose from on November 3, 2015. Voters will also be voting on a much broader, but competing ballot initiative (Issue 2). The way proponents have crafted the marijuana constitutional amendment has political leaders, businesses and other cannabis activists just saying “No to Issue 3” and “Yes to Issue 2.”

House Joint Resolution (HJR) 4 (Issue 2) is a proposed constitutional amendment initiated by the Ohio General Assembly. “HJR 4” seeks to prevent well-funded private citizens (like the ten property owners supporting Issue 3) from creating monopolies, oligopolies or cartels, specifying or determining a tax rate, or conferring a commercial interest, right or license to any person or non-public entity in the Ohio constitution. It also goes further to state that, even if the voters approve a constitutional amendment that conflicts with this provision (i.e. Issue 3) in the November 3, 2015, general election, “it shall not take effect.”

Read a copy of the Issue 2 language.

Read the letter from Governor Kasich, House Speaker Cliff Rosenberger and Senate President Keith Faber urging a YES vote on Issue 2 and a NO vote on Issue 3 on the November 3,2015 ballot.

Regardless of the outcomes of Issues 2 and 3 this November, employers should be reviewing their internal drug + alcohol policies to ensure compliance with existing laws. Such laws include the Ohio Bureau of Workers’ Compensation Drug-Free Safety Program (DFSP) in order to qualify for premium discounts if you are a state-funded employer. We will discuss issues that may arise due to “legal” marijuana later in this series.