Deal structure matters, which is why we’ve dedicating two pieces entirely to this topic, talking generally about each of the different structures and why they may be beneficial for a Buyer or Seller.

Last month, we focused on Asset and Equity Sales so that this month we can give all our attention to Mergers.

Before we do that, the obligatory caveats, disclaimers, and legalese: The below summaries and discussions are generalizations only. The actual impact may differ depending on the specific facts and circumstances. As such, you still need to get specialized advice before committing to a particular structure.

Which leads us to…

Mergers are the least common transaction structure in the private company world today, but they still have an important part to play. In a merger, the target company and the acquiring company are combined into a single company. Depending on the desired structure, either the acquiring company survives (known as a forward merger), the target company survives (known as a reverse merger), or – even more rarely – an entirely new company comes into existence (known as a consolidation).

Mergers have the same legal effect as an equity sale. The acquirer takes on all assets and liabilities of the target company, regardless of how the merger is structured. However, the tax treatment and practical aspects of the transaction change depending on whether the merger is a forward merger (or consolidation) or a reverse merger.

A forward merger (or consolidation) gets treated in the same manner as an asset sale for tax purposes and for purposes of the application of the “anti-assignment” clauses. In addition, intellectual property assets are often treated as being assigned as part of the merger, even though the technical legal definition of a merger would suggest that there was no assignment. As the taxpayer identification number of the continuing business will be different from that of the target company, employees and third-party relationships will essentially be treated as moving to a new company, raising some of the same headaches as noted above with asset sales.

A forward merger looks like this, when using a newly-formed subsidiary of the Buyer to serve as the merger vehicle: 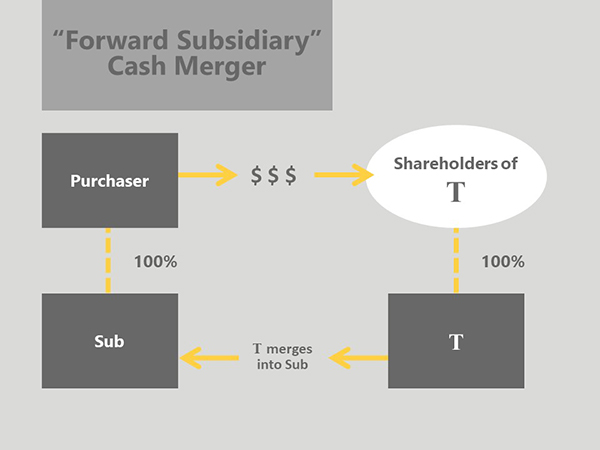 On the other hand, the reverse merger is almost identical to the equity sale in terms of tax treatment and practicalities. It looks like this (again, using a newly-formed subsidiary of the Buyer as the merger vehicle): 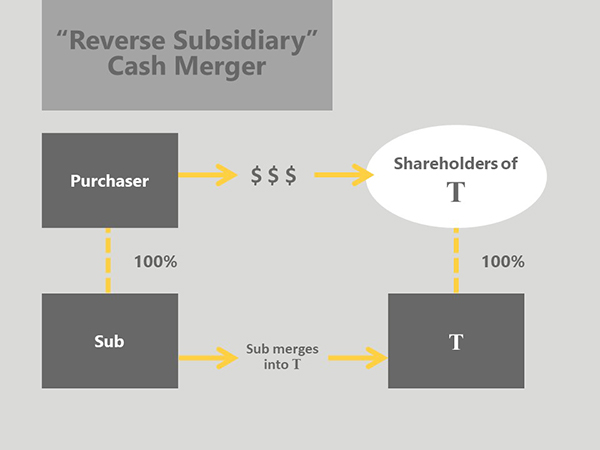 And the end result is this: 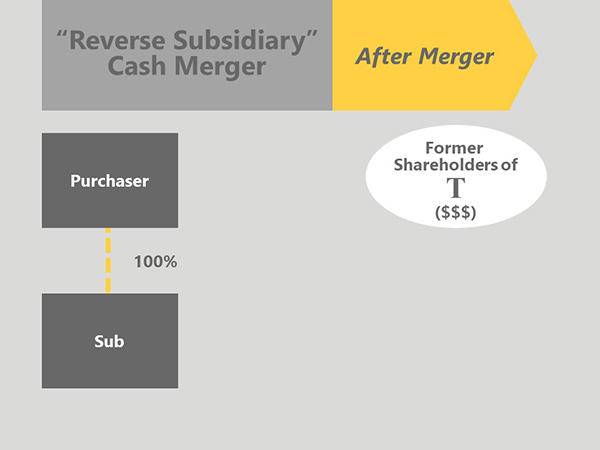 Looks just like the result of the equity sale, right? In both cases, the Buyer owns 100% of the target company as a subsidiary. So why not just use an equity sale? Hold on, I’m getting there!

So, the merger operates as something of a hybrid in which you can structure the transaction in a few different ways to get differing results – with the one significant exception being that the Buyer can’t avoid assuming all assets and liabilities of the target company, as it could in an asset sale.

However, unlike the equity sale where each equity owner has hold-up power over the deal, a merger can be completed without unanimous consent of the equity owners. Like the asset sale, a vote of somewhere between a majority and 2/3 of the equity owners is usually required to approve the deal. As such, relatively small equity owners aren’t given a disproportionate ability to influence the outcome of the deal, though they may have “appraisal rights” that are beyond the scope of this article.

So there you have the (relatively) short summary of the most common transaction structures and how they impact the deal. The devil is always in the details. It’s therefore important to get solid advice on the best way to structure a transaction for your particular deal. Despite what I’ve said above, there are times when a Seller may be neutral (or even benefit) from an asset sale. And Buyers may prefer an equity transaction for a number of reasons.

The key takeaway here is that deal structure directly impacts every deal economically, practically, and in terms of deal certainty. As such, it’s critically important for both Buyers and Sellers to think through the best structure at the outset of engaging in any transaction.

Next Month: Life Cycle of a Deal