Beginning on Friday, Kegler Brown’s Government Affairs chair Steve Tugend attended the celebration of Ohio’s Future Leaders and Innovators event hosted by Lt. Governor Jon Husted. On Saturday, the Government Affairs team was out in full force at the Governor’s Inaugural Gala, which was held at the Ohio Statehouse.

Attorneys and advisors from the Kegler Brown Government Affairs team attend the Governor’s Inaugural Gala at the Ohio Statehouse.

On Monday, all executive statewide constitutional office-holders were sworn in during various ceremonies held throughout the Statehouse and “Cap Square” (the buildings surrounding the Statehouse). Those who took their official oaths included Governor DeWine, Lt. Governor Husted, Attorney General Yost, Auditor Faber, Treasurer Sprague, and Secretary of State LaRose. Several members of the Government Affairs team attended various ceremonies, including that of Governor DeWine. 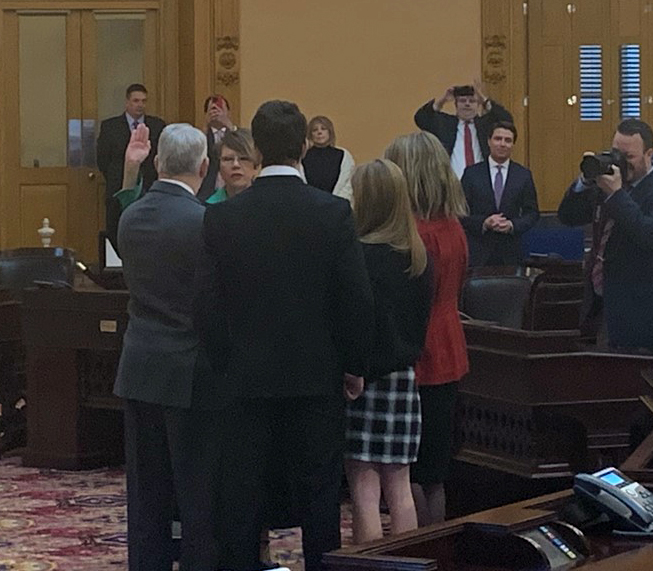 Ohio Supreme Court Chief Justice Kennedy administers the Oath of Office to Auditor Keith Faber as he stands with his family in the Ohio Senate Chambers. (Auditor Faber previously served as president of the Ohio Senate.)

Over in the Legislative Branch, the 135 th General Assembly has also begun. Heading the Ohio Senate for another two years will be Senate President Matt Huffman – a well-known attorney from Lima, Ohio. Due to term limits, the Ohio House recently said goodbye to Speaker Bob Cupp – a former Ohio Supreme Court Justice. Accordingly, during this General Assembly the House will be led by Speaker Jason Stephens, a veteran of government service who hails from Kitts Hill, Ohio.

Having concluded these formal inaugural events, the 2023 executive and legislative business of the state of Ohio is underway and Kegler Brown’s Government Affairs team will continue to be immersed in the politics, business, and developments around Capitol Square.