The new tax reform law includes a little-known provision that offers potentially significant tax advantages to investors. Under new Internal Revenue Code Subchapter Z, an investor may defer payment of capital gains tax by reinvesting the amount of realized, unrecognized capital gain into a Qualified Opportunity Fund (“QO Fund”) within 180 days. If the investment is held in the QO Fund for 10 years, then the investor’s share of profits in the QO Fund will be treated as 100% tax-free, and the investor will receive a 15% tax break on the initial amount invested. This new tax law is designed to incentivize the investment of an estimated $6.1 trillion in private, unrealized capital gains into Middle America.

1. What is a Qualified Opportunity Fund?

A QO Fund is defined in I.R.C. Section 1400Z-2(d)(1) as “any investment vehicle” organized as a corporation or a partnership for the purpose of making an equity investment into a business or asset located in a Qualified Opportunity Zone (“QO Zone”). If the QO Fund sells the position after 10 years, then the QO Fund receives a step-up in basis equal to its sale price.

On August 1, 2018, Allen sells an apartment building for a $1 million profit. Subject to the 20% long-term capital gains rate, Allen’s tax liability is $200,000. Rather than pay this amount to the IRS in 2018, Allen forms and timely elects to re-invest the $1 million profit into a QO Fund. The QO Fund invests in multi-family real estate assets located in QO Zones throughout the country.

On August 1, 2028, the QO Fund sells a portfolio of multi-family real estate assets, and Allen receives $5 million from the sale. Allen’s basis in the QO Fund is increased to $5 million, resulting in no tax on his $4 million profit.

In this scenario, Allen has achieved the full potential of IRC Subchapter Z:

2. Where are the Qualified Opportunity Zones?

Each state governor had until March 21, 2018 to nominate a limited number of certain census tracts to the Department of Treasury, and the Treasury had until June 18, 2018 to officially designate the QO Zones in each state. Thus, all QO Zones that will ever exist have been established as of June 18, 2018. IRC Section 1400Z-1(f) provides that the term of a QO Zone is only 10 years, beginning on the date it is designated by Treasury and ending on the 10th anniversary of its designation, no later than December 31, 2028.

There are 320 designated QO Zones in Ohio, 52 of which are located in the 11-county Columbus Region. 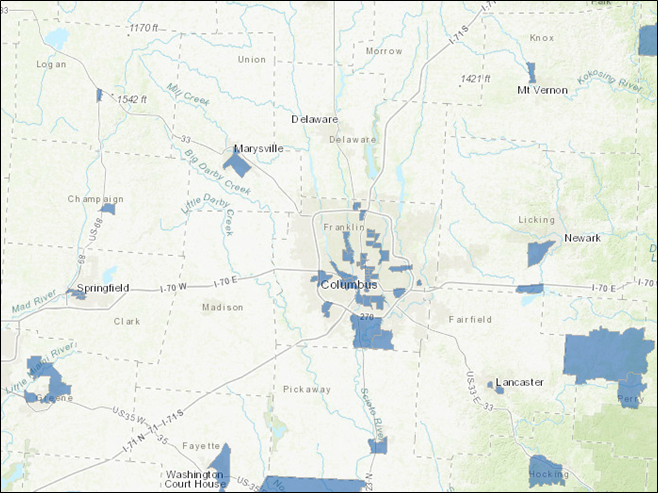 An interactive map of national QO Zones is available at www.cdfifund.gov/Pages/Opportunity-Zones.aspx.

The operative term in “Qualified Opportunity Fund” is “Qualified.” As enacted by Congress, IRC Subchapter Z contains many examples of ambiguous language that are subject to interpretation. The risk of regulatory uncertainty may deter some prospective investors from employing this new tax law, at least until the IRS provides clarifying guidance. However, while some investors wait for an acceptable level of regulatory certainty, the 10-year clock on the QO Zone program ticks. Kegler Brown Hill + Ritter advises clients on how to structure QO Funds and businesses to mitigate the risk of uncertainty.

For a deeper discussion of this new investment vehicle, as well as the liability risks, contact a member of our team of QO Fund attorneys by clicking on their name at the top of this article.