Just as many individual taxpayers dread April 15 each year as the deadline to file taxes draws near, employers in eight states are dreading January 31. That is the date the Federal Unemployment Tax Act (FUTA) taxes for 2014 are to be finally paid.

On Monday, November 10, 2014, the U.S. Department of Labor, Employment and Training Administration, Office of Unemployment Insurance (UI), posted the results of its review of state unemployment trust fund loan status. The result of the USDOL’s report is that employer FUTA taxes are increasing between $84 and $119 per employee, which is more than the minimum tax of $42 per employee.

Why are Federal UI Taxes Increasing?

The FUTA tax automatically increases by approximately $21 per year each year in states that fail to repay federal loans. FUTA sections 3302(c)(2) and 3302(d)(3) provide that employers in states that have an outstanding balance of advances under Title XII of the Social Security Act at the beginning of January 1 of two or more consecutive years are subject to a reduction in credits otherwise available against the FUTA tax, if all advances are not repaid before November 10 of the taxable year.

In addition, states passing their fifth consecutive January 1 with an outstanding advance may be subject to an additional credit reduction under FUTA 3302(c)(2)(C) (BCR Add-on). A waiver of this add-on is provided under 20 CFR 606.25 for states that meet the specified criterion. The size of the potential Benefit Cost Rate (BCR) Add-On increase is determined by a formula in federal law that is tied to the state UI tax efforts in comparison to average benefit payout over a five year period. Particularly in states where benefit payout was high but tax effort in comparison was low, the additional Benefit Cost Rate (BCR) add-on increase is significant.

The slow economic recovery from the Great Recession and solvency measures implemented in a number of states is finally resulting in the repayment of Title XII loans and avoidance of increasing Federal Unemployment Taxes in a number of states for 2014. Other states will have more work to do in 2015 to address state UI Trust Fund solvency.

BROWN states are those that are currently using employer financed bonds to repay Title XII loans.

California, Connecticut, Kentucky, New York, North Carolina, Ohio and the Virgin Islands had an outstanding balance of advances on January 1 in each of the years of 2010 through 2014, and did not repay all advances before November 10, 2014. These states face a 1.2 percent credit reduction.

South Carolina and Indiana had an outstanding balance of advances on January 1 in each of the years of 2009 through 2014, did not repay all advances before November 10, 2014. These states face a 1.5 percent credit reduction.

South Carolina applied for and was found eligible for avoidance of their 2014 FUTA credit reduction This approval allows the employers in that state to pay the lowest FUTA rate in 2014 of 0.6 percent. North Carolina and South Carolina are projected to pay off their remaining UI loan balances in mid-2015.

Connecticut was the only state that was penalized because it chose not to submit a request for waiver of the Benefit Cost Rate (BCR) add-on tax increase to the Federal Unemployment Tax (FUTA). Without a waiver, the FUTA automatically increases Federal Unemployment Tax rates for employers with employees in Connecticut. The waiver request was due under federal regulations to be submitted before July 1. The state decided to permit the FUTA tax to go up the estimated BCR additional 0.5 percent ($35 per employee) for FUTA taxes for 2014. The total FUTA tax in Connecticut (with reduced offsets) is now projected to be 2.3 percent ($161 per employee) instead of the normal 0.6 percent ($42 per employee paid in most states). With the state’s failure to seek waiver, employers doing business in Connecticut are projected to pay the highest FUTA tax rate in the country.

What are the Additional FUTA Taxes Per Employee? 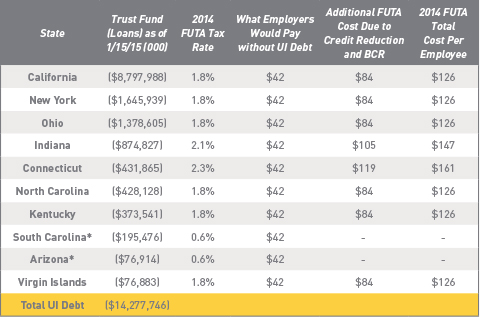 *Employers in AZ and SC are not subject to the FUTA offset credit reduction or BCR for 2014.

What Can Employers Do?

The overall solvency of the state UI trust funds is slowly recovering but a number of states continue to have significant outstanding debts and low trust fund balances that will be insufficient to avoid borrowing in the event of a recession. The impact of a FUTA tax increase will be felt most acutely as a percentage increase by employers who have low UI tax experience rates. Also, employers with maximum state UI rates that may not have budgeted for the additional FUTA increase may need to make adjustments to pay the higher tax. States with continuing unpaid loan balances in 2015 will see FUTA tax increases until such balances are paid in full.

The risk of further employer tax increases not only applies to states with existing UI loans, but also to states that have recently repaid such loans as well as states that are currently utilizing employer financed bonds to repay a prior UI debt. Employers should work with their Governor and state UI agency staff as well as legislative leaders to develop a plan to not only address state trust fund solvency today, but policies that will help rebuild their fund to weather another economic recession. Such plans should review the existing structure of employer taxes, benefits, administrative integrity as well as reemployment and workforce development strategies.

Tony is an attorney with the Columbus, Ohio based law firm Kegler Brown Hill + Ritter. He is also the senior editor and consultant for UWC Strategy, Inc., based in Washington, D.C. In 2012, Kegler Brown was retained by the business community in North Carolina to address its state fund solvency and eliminate a more than $2.5 Billion UI debt. The state legislature enacted many of our recommendations in 2013. North Carolina is expected to pay off its outstanding UI debt in 2015 returning federal taxes on employers to the minimum of $42 per employee.  For more information click  here. Tony focuses his practice on government affairs, labor and employment, and international business.