With the advent of the great recession of 2008-2009, state unemployment benefit accounts across the country were strained to the point of breaking, with a majority of the states being forced to borrow funds from the Federal government to meet their unemployment payment obligations. The size and length of the recession were greater than any recession since the great depression of the 1930s.

In response to the slow economic recovery from the Great Recession, solvency measures implemented in a number of states have finally resulted in the repayment of Title XII loans and the avoidance of increasing Federal Unemployment Taxes in a number of states for 2014. Other states will have more work to do in 2015 and beyond to address state UI Trust Fund solvency. 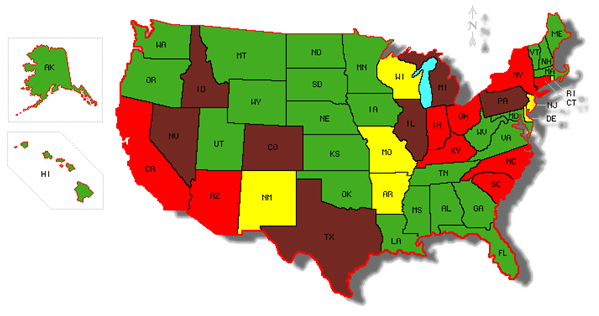 BROWN states are those that are currently using employer-financed bonds to repay Title XII loans.

The risk of further employer tax increases applies not only to states with existing UI loans, but also to states that have recently repaid such loans, as well as states that are currently utilizing employer-financed bonds to repay prior UI debts. Employers should work with their respective governors and state UI agency staffs, as well as legislative leaders, to develop a plan to address state trust fund solvency not only today, but policies that will help rebuild their funds to weather another economic recession. Such plans should review the existing structure of employer taxes, benefits and administrative integrity, as well as reemployment and workforce development strategies.

Because of Tony’s state and national UI experience, Kegler Brown was retained in 2012 by the business community in North Carolina to address its state fund solvency and eliminate more than $2.5 billion in UI debt. The state legislature enacted many of our recommendations in 2013 and North Carolina is expected to pay off its outstanding UI debt in 2015, returning federal taxes on employers to the minimum of $42 per employee.

Tony previously served as the director of labor and human resources policy for the Ohio Chamber of Commerce for 10 years and acted as the lead lobbyist for all labor and employment issues, including unemployment compensation. During his tenure, he worked with state UI agency officials and lawmakers to simplify Ohio’s unemployment compensation laws and help advocate for increased support for the state’s workforce development and reemployment services. In this capacity, Tony testified in the Ohio House of Representatives Commerce & Labor Committee, as well as the Ohio Senate Insurance, Commerce & Labor Committee. He also served as the Ohio Chamber’s liaison to the U.S. Chamber of Commerce’s Labor Relations Committee and as the Chamber’s lead spokesperson for print, radio and television media inquiries for labor and human resource issues.

He has been actively engaged in unemployment and employment security issues for more than 15 years, focusing most of his work in the last six years on state-by-state tracking of legislative changes related to the American Recovery and Reinvestment Act of 2009 and state UI trust fund solvency. Tony has tracked and reported on UI legislation, as well as significant law changes in all 50 states for the Washington, D.C.-based organization UWC Inc. since 2008. Additionally, he currently works with the Ohio State Council of SHRM as its director of government affairs.